A church in search of a mission

As it begins its seventh year of operation the inter-denominational Community Church of San Miguel, to which Stew and I belong, faces the crucial question Alfie was once asked: “What’s it all about?” This is an existential quandary that goes beyond incidentals such as whether the church needs a bigger choir or different flower arrangements.

Historically, churches have taken their creedal and liturgical cues from a visionary founder, in the order of Mary Baker Eddy or John Knox, or later from denominational lore, as in the case of Methodists, Roman Catholics and other mainline churches. Some rely on the fire of a charismatic leader to fill the pews on Sunday, like Joel Osteen’s  Lakewood Church in Houston and other megachurches with Walmart-size parking lots.

Alas, the genesis of the Community Church was not nearly as lofty, inspirational or focused: Some parishioners at St. Paul’s Anglican Church in San Miguel, an English-speaking, buttoned-up congregation, became embroiled in a very personal and bitter feud with its pastor Michael Long and ultimately a dozen or fifteen members walked out and convened their own "church."

Indeed, the split was nasty, rancorous and to some extent petty—hardly the most productive soil on which to plant the seeds of a new religious organization. Certainly the separation had little to do with liturgy or theological nuance.

Initially the new church was led by two retired Episcopal priests and a deacon who had officiated at St. Paul’s and gave the new group some direction. An “outreach” program was created to distribute tens of thousands of dollars donated by the congregation for charitable projects.

Those founding elders left after three or four years—the two priests because of age and ill health, and the deacon and her partner mostly as a result of infighting with some members of the congregation.

With their departure the church lost whatever liturgical or theological moorings it had. In effect, lay members were left to fill in the blanks as they went along and purely by default adopted, almost to the letter, the Episcopal order of service the dissenters had left behind at St. Paul’s.

The only "professional" guidance now comes from visiting ministers who are offered free airfare and housing but who preside for periods of approximately two months. They come from various Protestant denominations but here they celebrate the same Episcopal-ish mass or liturgy.

Three years after its founding, and over the strenuous objections of some of the church’s founders, a new, less encumbered service was created by members unhappy with the Episcopal/Anglican rigmarole of the main event. At its core, the minimalist new service so much resembles an Alcoholics Anonymous or Quaker meeting in that all members voice their opinions about the discussion topic of the day.

Except for joint services on Easter and other holidays most attendees at the earlier, lite service don’t interact much with those who attend the full-strength, Episcopal  liturgy. The new service in effect has become a mini-denomination of its own, confirming the fears of elders who opposed its creation.

About now, there’s a sense among some of the members that as the initial insurrectional fervor fades—and with no theological underpinnings or rationale to help guide it—the Community Church faces a potentially fatal loss of momentum.

So a new committee has been convened to develop strategies to attract new members. Even the participants of the early, more informal service are grappling with Alfie’s Dilemma: What’s this all about?

A few members have whispered about a thermonuclear option. Since the offending Michael Long has retired and our main service is nearly identical to St. Paul’s, why not shake hands, pass around the peace pipe and disband the Community Church?

St. Paul has its own English-speaking minister—a retired Episcopal bishop, no less—and the church has a beautiful facility with a closetful of vestments and liturgical paraphernalia.

But I suspect the cardinal sin of pride gets in the way of any such official rapprochement even though several individuals have quietly returned to St. Paul’s fold.

During the early service last Sunday Stew posed several trenchant questions for which no one had any ready answers: What makes this congregation different? What’s our special niche among the various religious groups already in town? What’s our mission? How do we explain to outsiders what we do and why we exist? Where do we fit in the vast firmament of Christian denominations?

Indeed, what's this all about?

To collect money to fund various charitable projects in town? That’s the role of a not-for-profit, of which there are literally over a hundred already operating in San Miguel. You don’t need candlesticks and communion wafers to help the poor.

Where’s our prophet to articulate the religious beliefs and liturgical practices of  this so-called church and lead it beyond its original and rather uninspiring creation story?

Those questions are crucial to the church's long-term survival. I'm not very sanguine there are any answers.
at March 27, 2015 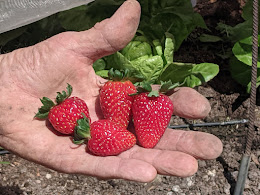 First berries of the season

In praise of boring

"Joe Biden has a real shot at being a boring president. It will require constant work. Many forces of commerce and human nature are arrayed against him, and countless obstacles stand in his path. But if the country is lucky, entire days will pass without the president's activities agitating the public mind." John Dickerson, in The Atlantic magazine. https://www.theatlantic.com/ideas/archive/2021/01/biden-should-build-back-boring/617740/