Perched on the edge of anxiety

I realize many folks don't like to read whiny blogs, but whining a bit is just what I feel I need to do right now, and since this blog is my baby, why not?

Or to paraphrase the lyrics of the late Lesley Gore's semi-memorable1964 pop hit, "It's my blog and I'll whine if I want to, Whine if I want to... You would too if it happened to you..."

Ever since the departure of our gardener Felix, who'd been with us for 12 years, things at the ranch have not been functioning well, largely because of the shock of the news and having to train someone new.

We found a replacement, Lupe, almost immediately, and he's working out well, almost too well. In fact, he's got the energy level of a gnat—perhaps thanks to his sipping Volt, a high-octane "energy drink"—but also, I'm sure, because he desperately wants to keep the job. His angst to do well is compounding to my own.

Lupe, in fact, accomplishes tasks faster than his predecessor who, we're finding out, hadn't been doing his duties very well perhaps because his mind had left for the Other Side of the Border a month or five weeks before his body had actually departed.

I have tried to reassure Lupe that this is a full-time, permanent job, not some temporary gig, and complimented him on this work. Please, Lupe, don't worry so much.

The one complaint we have, and which I've mentioned to him a couple of times, is his habit of speaking softly, almost inaudibly, and looking down while doing so. This unnerves Stew who speaks marginal Spanish, but also me because I'm a neurotic sort, in case you haven't guessed that by now, who also doesn't hear well, and worries about missing some key piece of a conversation. Uncertainty doesn't agree with me.

Then there's the repeated cancellation of our travel plans. When Stew and I retired, travel was at the top of our bucket list and we have done more than our share, traveling from Iceland to South Africa, and from Turkey to the Galapagos. We enjoy exotic sceneries and also the buzz of large cities like New York or Chicago, as a counterpoint to our ranch's tranquil familiarity. We had fallen into a routine of planning two major trips a year, plus a couple of shorter ones.

Covid came early last year, and a tour of medieval English cathedrals, we had scheduled for April, was cancelled by the tour operator and the airline. So we figured we'd try again, in the spring of 2021, but that also went down the tubes.

So we rescheduled again for October of this year and it's no-go for the third time. Constantly shifting travel requirements in Europe add an element of uncertainty that is just the opposite of relaxed sightseeing. Heck, Sweden recently announced, out of the blue, that no American visitors would be admitted until further notice, vaccinated or not, as if we were lepers.

Much has been written, or perhaps not enough, about the frustration the public feels as a result of the constantly revised now-you're-safe, now-you're-not protocols and travel precautions because of the pandemic.

Like millions of Americans, Stew and I had figured that the threat of the virus would recede by mid-summer, when a majority of Americans would be vaccinated, and life would return to normal. Then came the Delta variant, and warnings that we need to "keep our guard up," while a sizable idiot sector of the population refused to wear masks or be vaccinated, even as the mutating virus spread rapidly.

While millions have died around the world from the Corona virus, and the pandemic has upended the lives of millions more, it may sound crassly self-indulgent to complain about being deprived of the luxury of travel. But frustrated I am, at age 74 being unable to travel. Wearing masks while sightseeing or flying only reminds us that we're still in the middle of a plague.

Felix's departure further complicated our travel plans. We had come to take the guy for granted more than we realized, and assumed he'd be here house- and pet-sitting whenever we were away. Lupe, would be here, of course, but I'm not sure he's ready to watch the place for two weeks, or that we'd be comfortable enough to travel without worrying what might be going on at home. The concept of living in a condo with no pets, that we could just lock up and go away, sounds enticing at times like these.

An added aggravation has been the non-stop rain we've had since mid-May.

Complaining about too much rain when normally we don't get a drop for eight months a year, may sound truly whiny, downright ungrateful. But for example, last week we had gray skies and a perpetual Vancouver-like drizzle that was just this side of  depressing.

By now the ground is totally saturated. When Lupe dug a hole to plant a tree, it immediately filled up with muddy water, almost as if the water table was six inches below the surface.

Late yesterday afternoon we tried to do our impression of a pair of Welcome Wagon ladies, and visit two Mexican brothers, Gabriel and José, who are  building a house near our ranch.

Confident that our four-wheel drive Chevy Colorado pickup would get us through anything, Stew spun and fish-tailed down a road that rapidly deteriorated into a quagmire: The truck became firmly stuck in mud up to its side stirrups. So I had to walk the final 100 feet to Gabriel's house and ask if he'd pull us out with his Chevy Tahoe truck.

Gabriel showed up with chains towing straps and two of his dogs. One thing we remember from living in Chicago is that Mexicans love the challenge of automotive drama—pulling cars out of six-foot-deep, frozen snow banks or resuscitating car batteries that have been dead for six months. And so it was with Gabriel, who merrily took up the task of attaching chains and straps and pulled us out.

We drove back to the ranch with the truck covered with mud, including the windshield, and carrying 10-pound clumps of gooey mud on each foot.

When he saw us, Lupe burst out laughing as if we were some kind of comedy act.

After a couple of minutes, we joined in the laughter, embarrassed but relieved that our new guy can actually talk and laugh. 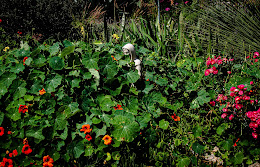 We've had so much rain this year that the foliage swallowed up the plastic statue of St. Francis we bought in Texas.

News about the fight against Covid

A 22-year-old hostess at Carmine's, a popular Italian restaurant in New York, was attacked by three women tourists from Texas when they were asked to produce proof of vaccination against Covid—as required by city regulations— before being seated. The three tourists were arrested and the hostess was sent to the hospital. Click here to see the video: https://tinyurl.com/4rujer5w