The life and world of Chupitos 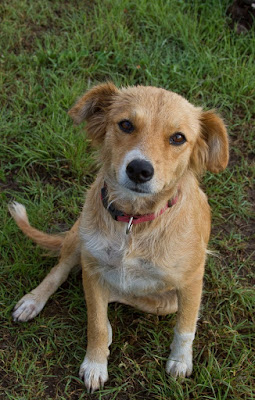 I'm convinced that the life of Chupitos--the dog--got off on the wrong paw when one of her previous owners gave her that name. Chupitos--the human--is a popular comedic character on Mexican TV whose schtick is her disheveled appearance, drunkenness, toothlessness and vulgarity. The human Chupitos is gross. The comedian told an interviewer that an alcoholic uncle had been one of the inspirations for the Chupitos character.

Humor generally doesn't travel well. What's funny in one country falls flat in another. That may be why I found the YouTube clips of Chupitos' act unfunny and even disgusting despite its popularity in Mexico.

I remember when I was as a child and a dubbed version of "I Love Lucy" showed up on Cuban television. The American producers must have figured it was a sure hit, what all with Desi Arnaz being Cuban, playing the bongos and going "Babaloooo!" once in a while. At least in my home we were mystified with the insipid humor and annoying laugh track.

Then you have the French who think Jerry Lewis is just hilarious. Mon Dieu! What is that about?

Even with all those caveats, the fact someone would name a pet after a repulsive character like Chupitos seems cruel and a bad omen for the poor animal. What happened to Fluffy, Ralph or Blackie? Those names somehow convey a certain affection for a pet that Wino or Dirtbag do not.

There are exceptions, of course. For still obscure reasons a relative named his dog "Barf," which nevertheless went on to reign for 15 or 20 years as the most loved and pampered bitch in all of Minnesota.

Chupitos the dog didn't fare nearly as well. Her owner briefly worked for us as a watchman during the house construction, after the first watchman was fired for stealing. He kept a scrawny Chupitos tethered to a post with a rusty piece of wire about a yard long, while her two young pups alternated between nursing and roughhousing with each other. For weeks the two-yard diameter of dirt allowed by the wire was Chupito's world, in which she ate, slept, pooped and looked after the puppies.

Her diet was almost exclusively leftover tortillas that the workmen casually tossed her way after eating lunch. I brought her some dog food which I had to leave at a safe distance, and which she ate desperately. Whether she was protecting her puppies or simply didn't trust anyone, Chupitos response was always snarling, even after I'd brought her food and water for several days.

Then her owner disappeared, apparently for another job, and left Chupitos and the pups behind. I asked the construction manager what was going to happen with the her and the puppies: He matter of factly replied that he hoped someone would take the puppies. As for Chupitos, he asked, "You want me to have her killed?"

I instinctively replied "No way!" even though I had no idea what to do with her. So Chupitos and the pups loitered around the site for several more weeks and then mysteriously disappeared. I didn't ask any more questions, fearing some horrible answers.

But about two months ago Chupitos reappeared, tail wagging, her two puppies in tow, accompanying our gardener Félix. It turned out that when the hapless trio seemed to have run out of options he had taken them all home. Now they come to work with him every day, grab a quick meal, and spend the day playing with our dogs. On weekends Chupitos occasionally on her own walks the one or two miles here from Félix' home to collect an extra meal and belly rub. We've had her spayed and taken all three of them to the vet for deworming and vaccines.

American animal lovers in San Miguel--most definitely Stew and I--pour much of their hearts, time and often their money on organizations to take care of the town's stray animal population. Abandoned dogs are particularly pathetic, rummaging through garbage, wandering the streets and getting killed on the highways. On the road between our house and San Miguel a dog turns up dead nearly every other day.

Chupitos and her puppies fall in the category of "there but for the grace of God" animals who have been rescued by kind Mexicans or Americans. That applies also to our two dogs, Lucy, which was rescued as a two- or three-month-old puppy abandoned by the side of a road, and Gladys which we found hungry and injured wandering in the parking lot of the apartment complex where we used to live. Then we also have three more stray dogs (Miss Titties, a grizzled female about 10 years old and the obvious survivor of numerous pregnancies, plus her two apparent relatives Bruno and Dopey) who show up every day by our gate looking for handouts.

But lately we've also started to focus on the misery of people living around the ranch. Most of that awareness comes from Félix who has lived around here all his life and seems to know practically everyone within a five-mile radius, along with their personal histories and circumstances. There's the family with 13 children, three of them mentally retarded, who live in a shack a ten-minute walk away from our place that has no plumbing, electricity or heat. The father has no visible means of support except what he brings from doing occasional small jobs. Other horror stories trickle in regularly from Americans we know who volunteer for groups with telling names like "Feed the Hungry" and "So Others May Eat."

Meanwhile Stew and I keep feeding bunches of stray dogs and giving money and time to animal welfare groups. Do we suffer from a form of myopia, or callousness, that screws up our charitable priorities? Should we be buying 50-lb. bags of dog food or spending $60 on shots for Chupitos and her puppies, while there are people around us with little to eat?

While our house was under construction, a friend who cares for approximately 50 (fifty) stray dogs at his ranch came to visit and gently scolded the first watchman we employed for not feeding his dogs enough. "Your dogs are too skinny!" my friend said. "So am I!" replied the watchman without the slightest hint of a smile.

A Mexican friend recently told me that during a local radio talk show someone had called to complain that many San Miguel pet owners fed their animals nothing but day-old tortillas. A flood of calls came in shortly from listeners asking, what do you think a lot of San Miguel families eat?

Some Americans, a bit self-righteously, refuse to contribute to any animal organizations. When Stew asked a friend to host a benefit for the animal shelter she replied that she only supported groups that helped people.

Stew has worked around this animals vs. people dilemma by arguing that there are literally over a hundred charitable organizations in San Miguel attending to some aspect of human needs. There are only two that look after animals and it's only fair that he should focus on the latter.

To me the most comfortable rationalization is the one offered by my friend with the 50 strays: There are so many needs and things wrong here, and in the world in general, that you just do what you can do. Take a pick: stray and injured animals, hungry families, teenage girls with no access to a high school education, and many other tragic causes. So he devotes most of his days and personal fortune to animals.

For now, I'm helping animals and also a few needy people, notably Félix and his wife and baby daughter. In addition to his pay, we give him clothes and helpings of fruits, vegetables and once in a while a much-appreciated kilo of "carnitas," or marinated pork, a local favorite, to stuff his tortillas. We also give him buckets of dog food for Chupitos and the puppies, plus veterinary care which he couldn't afford.

No matter where this rationale takes me, it's clear that the dog food has had a palpable effect on Chupitos. When she first showed up with Félix she would casually sneak in and out through the iron bars at the gate. Now that she's put on some weight she no longer fits through the bars.

Using the ingenuity that has kept her alive, Chupitos just dug a hole under the fence at one far corner of the ranch so she can still sneak in and visit on weekends, and cop some food and attention. On Sunday mornings we can count on her standing by the living room door, looking in.
at August 05, 2010 1 comment: