Tiptoe through the Cactaceae

When our house was still in the dreaming phase, circa 2008, Stew and I envisioned an enclosed front yard that would hold a collection of subtropical plants somewhat in the style of an English walled garden. It would provide a lush break as one entered the house, between the semi-desertic outdoors and the indoors.

It was a good concept. Even though we're entering what in San Miguel passes as spring or the beginning of summer, and many wild plants are fluttering and whispering to one another about blooming—and a few are actually doing just that—there's no rain in the forecast for at least another five months. During that time we may expect some cacti, aloes and other flowering teasers but for the most part very dry air and wind that'll keep us slathering ourselves with moisturizing lotion like a couple of aging movie stars.

Mind you that with a horrific winter still battering the northern United States I'm not complaining about dry skin or the tedium of clear skies and temperatures in the mid-seventies—day in and day out. One can get used to that.

During the first five years the semi-tropical patio thrived alright with bird-of-paradise plants, ferns, the ubiquitous (in San Miguel) lavenders and lantanas, with potted geraniums and other flowering plants in the middle. Meanwhile my interest in potted cacti and succulents grew obsessively with dozens of pots piling up as they awaited their turn on the main stage.

By late last year the front patio had evolved into an out of control jungle, as lavenders towered over cowering cacti and lantanas mounted a blitzkrieg to annex the other half of the patio. To get to the Meyer lemon and navel orange trees you had to push your way through the foliage that included a moribund climbing rose bush that begged for some sun and air to breathe.

Even the big tree in the middle, a Japanese privet that in Mexico for some reason is called "trueno" (thunder) and which had nearly died when we planted it, had shot up to almost fifteen feet, its cover so wide and low that it shaded most of the patio.

It was time for some drastic measures. We yanked out most of the plants, except for the trees, some tall ferns and the showy Bird of Paradise plants which seem to like it here. In their place we moved the potted cacti and succulents that had sat patiently on the sidewalk around the patio for months if not years.

Before I become too promiscuous with the Victorian "we" let me clarify that Félix did most of the heavy lifting, with all the digging and hauling of dirt and rocks. He is after all, forty years younger than me and with a deep, factory-applied cinnamon skin tone doesn't need to worry too much about getting sunburned.

He was enormously proud with the results and kept walking around muttering, "Quedó muy bien, muy bien" ("It came out really nice, really nice.") 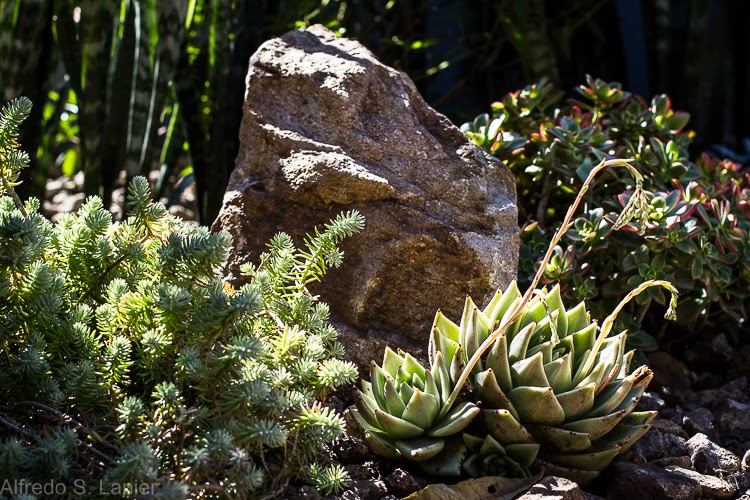 It did indeed, though the plants need time to grow and fill in the space so the patio doesn't look so sparse. And we still have even more potted cacti and succulents waiting for a permanent place to live.


Along the way I picked up a hobby that I hope will strengthen my memory: Learning the Latin names of all the cacti and succulents that now inhabit the front yard. No more agave with a white stripe on the leaves, but Agave americana medio-picta alba (literally "American agave with a white stripe down the middle"). Forget jade plant; let's talk Crassula ovata. As far as I can tell, crassula covers large number of succulents with fat, fleshy leaves most of which don't look much alike.

Admittedly the nomenclature can get quite hairy, or should we say, pilosus. So far my two favorite botanical names are hippomanicus ("with the ability to drive horses mad") and hircinus ("which smells like a goat"), though I haven't found any plants yet to go with those labels.

I tried to encourage Félix, who has a prodigious memory perhaps on account of being so young, to learn some botanical Latin but he just gave me a strange look and walked away. Then again I have no business asking him to remember a bunch of Latin names I can't get straight in my old head myself.

Some sources about succulents and cacti:

About the mysterious world of botanical Latin:

Also a really useful website for plant names in Spanish, Latin and English, developed by the Oaxaca Garden Club:

The odd charm of a mini mutt

At roughly five months of age our fifth dog Felisa is staying relatively small. She is not going to be a miniature or a teacup anything, yet weighing just six kilos she is blissfully petite compared to our other dogs which start at nineteen kilos or roughly forty-two pounds. Even our two hefty cats weigh as much as Felisa.

We're discovering that small is good at least when it comes to dogs. You can carry Felisa under your arm or placidly cradle her on your lap while watching television, unless one of the cats ambles by and a hissing and barking brawl ensues. She fits, albeit barely, in a shoulder bag. She can nudge her way onto a dog cushion even if there's another dog already on it. She eats only half as much as any of the other dogs and poops proportionately. A paper towel will do, no need to reach for a dustpan or a shovel. 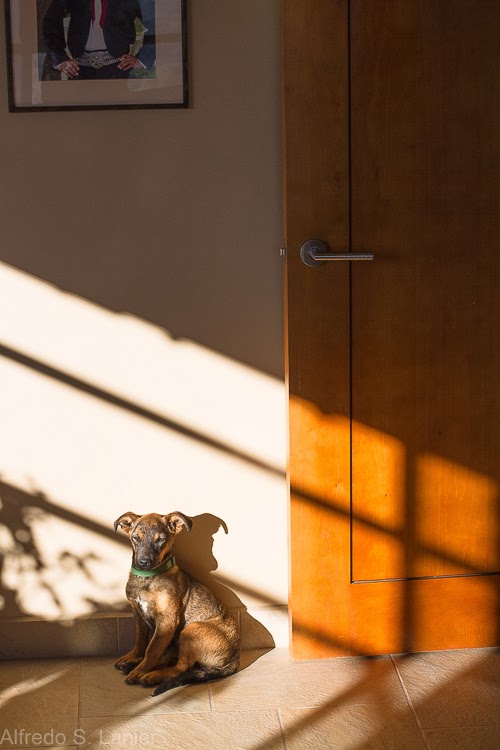 Felisa's diminutive physique, ridiculous bark, and overall ungainliness don't impinge on her self-esteem. She will bark furiously at a donkey or a goat passing by the front gate, oblivious to the disparity in size. There's no need to reassure Felisa about her rank in the animal world: She's tops or so she thinks.

On the down side we now need to watch our step, particularly in the dark, so as to not trip over her like a pair of stray sneakers. Her bark, a screech more rat than dog, is not very classy but what can you expect from a specimen found abandoned and starving by the side of the road with its head all cut up and bloodied?

You get what you pay for. Felisa came to us free so we can't demand the elegance of a Greyhound, the menacing roar of a Pit Bull or the the rumbling basso of a Rottweiler. Just a plain little mutt with a high-pitched yippee.

If anyone could trace it, Felisa's family tree would look more like a bramble. She is compact but not enough to be a Chihuahua; longish as if to suggest a Dachshund, but not quite so. Her stumpy feet and splayed front paws say "penguin" but Felisa is definitely a quadruped. The tail is about half as long as her body, which could portend a larger dog or just an oddly proportioned one.

The first vet that checked her out theorized she might have some German Shepherd blood, which prompted our gardener Félix to guffaw that the guy must be fresh out of school or a complete pendejo. Last week a second vet proposed the Dachshund hypothesis.

It's useless trying to predict her provenance as if she were a fine painting. Felisa is all or none of the above, the result of a casual tryst, an unguarded moment of doggy passion under the moolight out in the country. She was not engineered by a breeder. A map of her genes would be more Jackson Pollock than Leonardo da Vinci.

None of these unseemly details bother Felisa. She wakes up deliriously happy as if she had won a huge prize, which indeed she did when Félix discovered her helplessly whimpering and shivering. She is a prize for us also, albeit a small one. Stew and I hope she remains so—and a bit strange—just as she is.