Given that the last time I saw the southern port city Cienfuegos was fifty-one years ago, when I was thirteen years old, my memories of it proved to be amazingly vivid.

I recalled that my maternal grandmother and my spinster aunt lived in a traditional home near El Prado, the town's main boulevard, and around the corner from a drugstore and the Pujol Funeral Home. When there was a big wake, I recall, the mourners' eerie hubbub wafted over the interior courtyards of the houses in the block and into my grandmother's living room.

Next door to my grandmother and aunt lived my uncle Arturo, with his wife and two children. Arturo and his wife América then moved to a custom-built house in Punta Gorda, a rather swanky neighborhood on a narrow finger of land that poked into Cienfuegos' huge harbor.

Even as a child the house had an impact on me. Almost a vision. Far out. Awesome. A roof jutting out to the sky in the shape of a "V," instead of the other way around like normal houses. Nothing like it in Cienfuegos, a beautiful but quite conventional city adorned mostly by colonial and European architecture.

In 1961 Cienfuegos briefly made the news because it's located roughly sixty miles east of the Bay of Pigs. Ten years later Cuba and the Soviet Union began building a nuclear power plant, later abandoned though its hulking concrete shell is still visible from Punta Gorda. Given the subsequent accidents at Three Mile Island, Chernobyl and Fukushima, the day that nuclear plant was abandoned was a lucky one for the 165,000 residents of Cienfuegos.

When we spotted Arturo's house during our visit three weeks ago it was more than a vision, almost a hallucination. Not only was the house still standing but it was intact, inside and out, including a 1957 Chevy sitting in the garage, also intact, with its unmistakable tail wings poking up, almost echoing the roofline of the house. 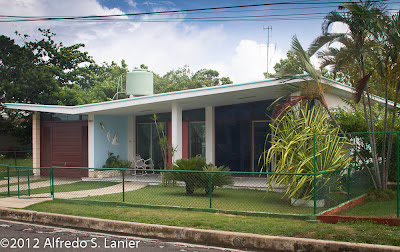 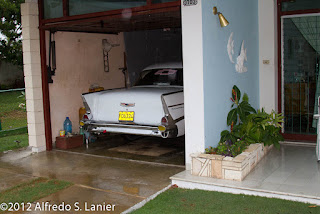 My uncle, who evidently was a guy of some means, in 1958 hired a Havana architect last-named Carbonell to build if not quite a mansion, certainly a luxurious home. All the furnishings inside were custom designed and crafted, in the modernist style of the era. Practically all of the house, inside and out, remains the same, lovingly--almost obsessively--maintained first by my uncle, who died 1992, and now by one of his grandsons, nicknamed Juanchi, and his wife Norma.


The miracle of this house is that there are so few like it left in Cuba in such good condition.

Though a distinctive modernist residential style flourished Cuba during the 1950s, most of the owners fled the country following Castro's victory in 1959 and then the government confiscated all that real estate.

And as Cuba skidded from one economic crisis to another there was little money to spend on their upkeep much less restoration. Many of the homes were turned over to poor families, and fell victim to shabby subdivisions and further abuse.

I suspect there was also a certain element of schadenfreude and class warfare involved in the government's policy of neglect. Think of it: Houses formerly inhabited by the rich were now turned over the poor. Modernist homes became a symbol of the exploitative old days before Castro.

The 1950s homes were low-slung and flat roofed. Jalousie windows, sometimes made of glass slats, as in my uncle's home, dominated the exterior, almost inviting passersby to peek at the inside. Porches  dominated the facades. Instead of symmetrical details, these homes seemed to be constructed of blocs, often brightly painted and stacked next to each other like giant Lego pieces. Grids, round planter boxes, angled pillars and other whimsical details prevailed.

Some of this minimalist influence probably blew in from Europe and the less-is-more style of architect Mies van der Rohe and others, which also influenced tropical home design in Miami and South Florida.

Yet the Cuban houses to me somehow seemed distinctly Cuban.

My uncle's house has walls of glass jalousie windows at both ends, presumably to facilitate cross-ventilation. As wealthy as he may have been there was only one air conditioner, in the bedroom. The eaves are extra-wide to shield the interior from the scorching tropical sun and the torrential rains. The layout is utterly straightforward. The floors are white, foot-square glazed tiles.

These homes' simplicity and sturdy construction ultimately may be what saves them. They're all concrete, with little wood to rot or stone carvings to crumble. In Havana, many of the grander mansions also have been sold off as foreign embassies or housing for their personnel.

Still, the rampant weeds and the mold creeping up the walls of most of these houses, and the trashing and looting of their interiors, is a damn shame--regardless of how you may feel about Castro's revolution or the eternal conflict between the haves an have-nots. 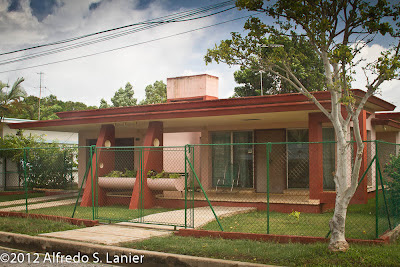 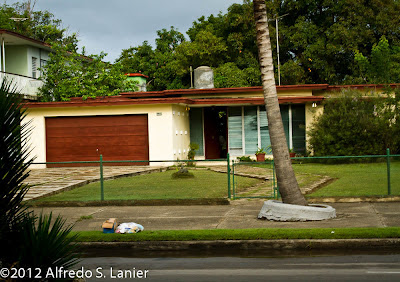 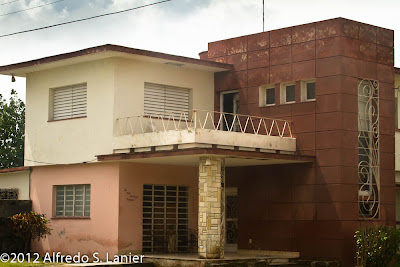 Also check out this article by Gary Marx (no relation to Karl), a former colleague at The Chicago Tribune: http://www.utsandiego.com/uniontrib/20051016/news_1h16cuba.html 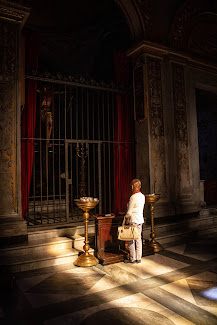