Twenty years ago, when I worked for the Chicago Tribune, I maintained contacts with a few genuine Cuban communists, in particular a comely young couple who fervently believed everything Castro had ever said, thought or done. Any attempt at debate with them was about as pointless as arguing with one of Trump's disciples today.

Once they invited me to a cocktail party at Cuba's Mission to the United Nations, an imposing if dilapidated building on Lexington Avenue in New York, where we excitedly waited for the Maximum Leader to appear, and say a "few words," a long-shot promise, given his legendary loquacity. Asked about tomorrow's weather Fidel would ramble on for three hours about how Yanqui imperialism had ruined the earth's climate. He never showed up that night, and I left around one a.m.

My young communist friends also invited me to the Cuban embassy in Washington, an impressive, if dowdy, Beaux Arts building big enough for a country four times Cuba's size, and equipped with a huge ballroom to match. During the glory days before Castro, the embassy hosted New Year's Eve blowouts that, supposedly, were one of the hottest tickets in town.

When I visited, the lobby was decorated with plaster escutcheons symbolizing Cuba's six original provinces. But alas, in 2011, Castro re-configured the island into 15 provinces, but apparently there wasn't enough money to update the embassy's lobby in Washington.

In a ham-fisted attempt to spur après lunch conversation, I once asked my friends how the embassy celebrated May 20, Cuba's Independence Day. There was silence. And as soon as the words left my mouth, I could see them landing on the middle of table, like a glop of pigeon shit. Uh-oh.

The young wife, swallowed hard and then politely explained that May 20 was not Cuba's real independence day. The real deal was January 1 (1959), she said, when Cuba attained true independence, finally freed from the yoke of Yanqui imperialism, and became the "Free Territory of America."

A few more seconds of awkward silence elapsed. Coffee, anyone?

In fact, Cuba can claim two independence days, both dubious.

The war of independence against Spain began in 1895, and quickly attracted the attention of the U.S., where the insurgents gained favor with both, American business interests and religious groups, the latter concerned with Spanish atrocities in its drive to quash the rebellion.

Tensions between the U.S. and Spain exploded, literally and figuratively, when the USS Maine blew up in Havana's harbor on February 1898, and the U.S. declared war against Spain. To this day, no one knows for sure who was responsible for the blast. In August, the Spanish-American War came to an end, and the U.S. gained control of Cuba, Puerto Rico, the Philippines, and Guam. 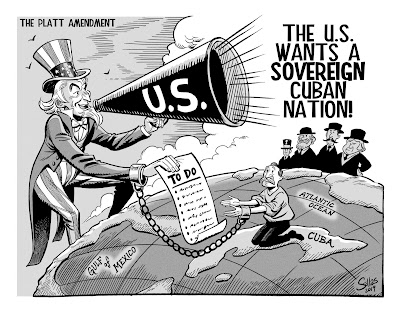 In 1899, the U.S. formally occupied Cuba. A constitutional assembly was convened. However, the U.S. demanded that a poison pill be included in the constitution—the Platt Amendment—that in effect gave the U.S. the right to intervene in the island's affairs whenever U.S. interests were endangered, as so defined by the U.S.

With that footnote in place, on May 20, 1902 the U.S. ended its occupation and Cuba gained its independence.

Or was it "independence"?

In 1903, Cuba ceded 45 square miles to the U.S. to install the Guantánamo naval base. From 1906 to 1909, the U.S. re-occupied the island to suppress an insurrection, and in 1912, American troops put down a rebellion by Afro-Cubans in Oriente province, that was threatening U.S. property. And from 1917 to 1922, the U.S. moved into the island again, to sort out a disputed presidential election and armed rebellion.

Indeed, overt or indirect U.S. meddling has been a fact of life in Cuba's history, most recently with the Bay of Pigs fiasco in 1961, followed by economic embargoes, and attempts on Castro's life, my favorite being the CIA's plan to kill him via an exploding cigar.

Truth is, Cuba's "independence," and its march toward any semblance of democratic government, has been a stumbling, uncertain affair, like someone trying to do a rhumba on a dance floor littered with banana peels. It hasn't been pretty.

I've lost touch with my two communist acquaintances who by now must be in their late forties and ensconced high up in the Cuban nomenklatura—or selling real estate in Miami.

As for me, I fly the Cuban flag on May 20. It doesn't mark the arrival of perfect independence and democratic government in Cuba, I grant you, but it's a hell of a lot better than what came after Castro took over on January 1, 1959.
at May 20, 2020

Tell me what you think